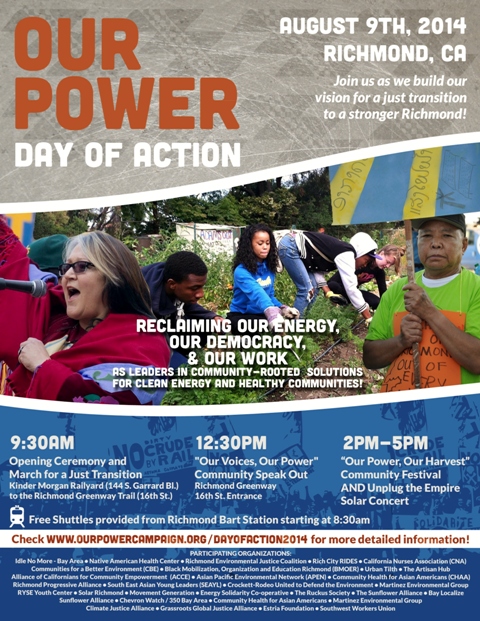 In early August, local and national groups along with the Climate Justice Alliance  will host the Our Power National Convening, which will culminate to the Our Power Day of Action on August 9th!

Richmond, California is one of a growing number of “Our Power Communities”- home to a working-class, predominantly people of color community impacted by decades of environmental blight, high unemployment, home foreclosures, and economic divestment. It is also home to a 3,000 acre Chevron Oil Refinery – one of the largest stationary greenhouse gas emitters in the State of California.

In the shadow of Chevron’s long track record of pollution, and 2-year anniversary of the refinery explosion that sent thousands of Richmond residents to the hospital, we are fighting to replace Toxic Oil Alley in the Bay Area with Our Power – reclaiming our energy, our democracy, and our work. Instead ofexpanding fossil fuel infrastructure, it’s time to make a just transition, away from fossil fuels to sustainable local economies, rooted in clean renewable local energy, meaningful and healthy jobs, and community democracy. The city’s residents have a vision for a just transition to a Stronger Richmond: we want to be a leader in community-rooted solutions for clean energy and healthy communities.

Richmond is part of a growing national campaign called the Our Power Campaign, where communities on the frontline of environmental pollution are asserting Our Power to build local living economies that work for people and the planet.  Richmond-based organizations and the Our Power Campaign are now calling on everyone to join them in building this just transition. The Our Power Day of Action 2014 will raise up the voices of Richmond community members to realize their visions of the future. Together we can not only stop the expansion of dangerous, polluting refineries and pipelines, but begin a just transition away from fossil fuels and towards clean energy, good jobs, and healthy thriving communities.

The day’s schedule will include a community march to the Richmond Greenway, a community speak out/rally, a festival of community-led "solutions" inspired and anchored by some of the local work happening in Richmond, culminating in a solar-powered concert called "unplug the empire" which will happen in partnership with Urban Tilth and others at the 16th St. entrance of the Richmond Greenway.

See below for the schedule for events.

9:30am – Opening Ceremony & March for a Just Transition

*** FREE SHUTTLES PROVIDED FROM RICHMOND BART STATION starting at 8:30am***

The day’s events will commence with an opening ceremony in collaboration with Idle No More and the Native American Health Center at the Kinder Morgan Rail Yard. We will commemorate the 2nd anniversary of the Chevron refinery explosion that sent over 15,000 Richmond residents to the ER. We will ground ourselves by honoring the land we are on, illuminating the unjust and disproportionate impacts on frontline communities like Richmond posed by unjust extractive energy industry and corporate greed.

We will then march from the Kinder Morgan Rail Yard to the Richmond Greenway Trail, celebrating the notion of just transition away from dirty energy and corporate greed, to local living economies rooted in justice, sustainability and community resiliency.

The march will arrive at the 16th street entrance of the Richmond Greenway Trail  where a solar powered community speak out will be held, amplifying stories of resistance and resiliency of Richmond and other frontline communities at the junction of environmental, health, work and housing injustices.

Communities members of front-line Refinery communities, labor, health and housing justice organizations will speak out about the climate crises facing our communities and share their visions of community resiliency and a just and sustainable Richmond.

Speakers from the following communities and organizations will be present: