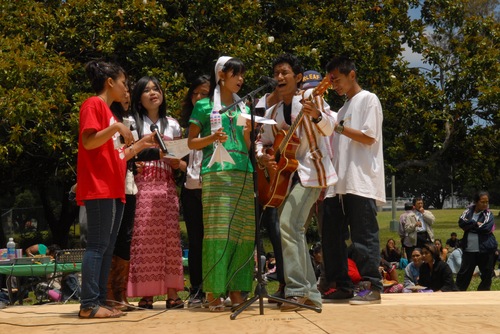 Olivia Byler, coordinator of the East Bay Refugee Forum, was impressed with the day’s activities and was heartened by the enthusiasm shown by the crowd.

“Considering that the day had less than ideal weather, those who attended were so enthusiastic,” Byler said. “From refugees sharing their personal stories of accomplishment to entertaining us with traditional cultural performances, everyone seemed very happy to be there.”

Following the introductory remarks, two former refugees who had successfully resettled spoke to the group.

Vietnamese refugee Luan Huynh and Burmese refugee Ko Ko Lay reflected on their experiences coming to the United States and finding a career that allows them to give back to the community. While both find themselves advocating for refugee rights, Huynh uses her skills for the East Bay Community Law Center and Lay recently finished his third term as a member of the Strategic Coordinating Committee, the only worldwide Burmese coalition group including the National Coalition Government Union of Burma (NCGUB) and National Council of the Union of Burma (NCUB).

In addition to exchanging personal stories, refugees and their families enjoyed lunch, raffles, and soccer games organized by Soccer without Borders. A dozen community organizations and their representatives were also present to provide resources to those in need of information.

While Byler enjoyed all events of the day, she was particularly moved by a performance given by the Refugee Transitions youth leadership group.

“Students were nominated for this group to further improve their leadership skills both within and outside of their native Bhutanese and Burmese communities,” Byler said. “These kids performed a Michael Jackson song (“Heal the World”) with a theme of unification, and they showed so much heart and soul while they closed their eyes and sang. The moment went perfectly with this year’s UNHCR’s theme of ‘Home,’ with its message of ‘You can take our home, but you can’t take our future.’”

Founded in 1978, the East Bay Refugee Forum has sponsored at least 10 picnics and enjoyed the participation of approximately 40 agencies this year. Despite the large amount of cooperation, however, Byler says the event is always looking for volunteers.

“While we have many agencies coming together for the day’s activities, there are still gaps that need to be filled,” Byler said. “We encourage anyone who would like to give back or who is interested in refugee issues to contact us and ask how they can help.”

Volunteers are especially needed in the areas of translation, interpretation, and food service, according to Byler. Additionally, anyone with technology or A/V experience to help with audio and taking pictures of the event would be highly appreciated.

If you’re interested in volunteering at next year’s World Refugee Day or helping with other East Bay Refugee Forum events, please contact Olivia Byler at eastbayrefugeeforum@gmail.com.