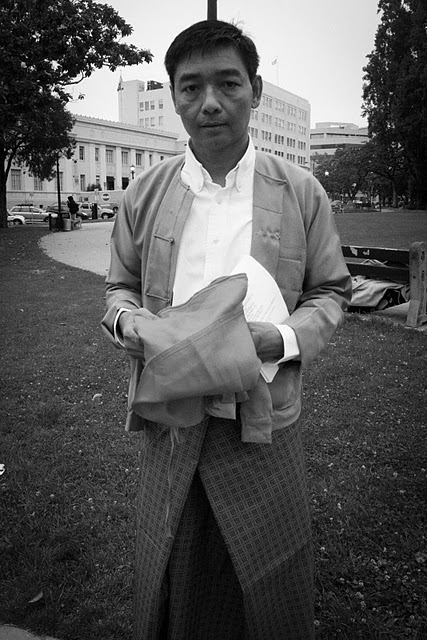 The following article is courtesy of S. Nadia Hussain, originally published on usordinarypeople.blogspot.com. Nyunt Than, the current head of the Burmese American Democratic Alliance (a non-profit organization in the Bay Area that works on democracy and human rights issues in Burma) is a Burmese leader whose activism going back to his days as a student during the 1988 pro-democracy uprisings. At the time, Nyunt Than* had just graduated from Rangoon Institute of Technology when the military regime shot and killed three student protestors from behind. “This act exposed the regime for what it was” he explained. “Now annually we commemorate that day, March 13, as Burma Human Rights day.”

“The protests in 1988 were initially led by students, but soon spread across the country as civilians, from children to housewives and doctors, joined in to rise up against the military dictatorship that had been running the country into the ground since 1962”. Despite having a broken leg due to a recent car accident, Nyunt Than took to the streets in resistance. The protests ended up leaving thousands dead as the regime brutally suppressed the movement. After the uprising ended, there were immediate crackdowns and arrests of students. Many students escaped towards the Burmese border into countries like Thailand. Nyunt Than stayed behind, however, due to his disability and a desire to finish up his graduate degree.

During this uprising, Daw Aung San Suu Kyi, Nobel laureate and the daughter of the founder of Burmese Independence, Aung San, became a prominent opposition leader for democracy, creating the National League for Democracy party. In 1990, the military-backed Burmese regime lost the national election to Aung San Suu Kyi (or ASSK for short) and her democratic party. “During that election, I went back to my village and that’s where I witnessed how much people were hoping for change. Everybody came out and voted for her; they thought there was going to be real change. The next day, the radio announced the winners and I thought," Nyunt says with a sardonic laugh, “what can these people [the regime] do now? I thought that things were going to be different, but I was wrong. The next day they [the regime] outright denied Aung Saan Suu Kyi power, which eventually led to her arrest, and many student leaders got arrested again and again.” It was then that the Burmese regime overthrew the results of the general election and arrested ASSK, placing her under house arrest and jailing other democratic leaders who had won seats in the parliament. Some of whom would later died in prison.

Upon finishing his masters degree in 1991, Nyunt Than was quick to leave Burma. “The regime lies, they kill and will do anything to keep themselves in power, I intensely disagreed about what is going on in Burma, that’s why I decide that I will never work for this regime, as soon as I finished my education I left towards Singapore and lived there for 4 years. Activism in Singapore was very difficult because they are close to the Burmese regime”. After four years, Nyunt was able to migrate to the United States. Once in the US, Nyunt felt that he was could work to help his home country. He became involved in protest activities and soon helped found BADA and became the Secretary of the organization.

The oppression increased after Nyunt Than left. “The world was on edge when the regime brutally cracked down on the 2007 peaceful protests by Buddhist monks. In May of 2008, a massive cyclone Nargis hit lower delta area of Burma and killed nearly 200,000. With bodies scattered all over the region and millions of survivors looking for land, food and water to survive, the regime, instead of helping the people, moved forces within the country to come to the polls and approve a sham constitution."

When it comes to the protests that Nyunt Than works to organize, he has some strong points to address about economics and corporate interests in Burma. “If you look at why the dictatorship is still in power since it began rule in 1962, neighboring countries are very much responsible for this, especially China, India and ASEAN countries especially Thailand, Singapore, Malaysia. Though the US has sanctions and the UN is driving pressure, these countries still work with the regime to exploit our natural resources to cut prices. For China, Burma becomes a geographically strategic partner for them, because China sees Burma as their back door to the Indian Ocean. In times of war they want to make sure that all oil transport from the Indian Ocean can reach China; they want to use Burma as a back gate. Burma is also rich in natural resources and China is looking for resources throughout the world and Burma is right next door.”

Nyunt Than continues,“[In Burma, people struggle to live hand to month daily and have nothing much to eat due to the scarcity of food. They don’t even have enough electricity for their basic needs in the cities. Burma is exporting the largest amount of natural gas in the region to power factories in neighboring countries. The regime gets millions of dollars while the people struggle. There is gas pipeline to Thailand and one of its operators is California’s Chevron corporation. China is building a huge gas pipe line from Burma to China’s Yunnan Province. We are currently in the mists of protests against the Chinese dam on our the vital Irrawaddy River* to produce electricity for China. Burma is about the size of Texas and half of it used to be covered by forests. Now forests are no longer there and a few years back the country faced the severest drought seen in Burma’s history due to the lack of trees."

Besides issues of poverty and lack of education, Burma is also notorious for endemic human trafficking and widespread use of child soldiers. Human Rights Watch has released multiple reports and one of the reports, “My Gun Was As Tall As Me”, addresses the child soldier problem in Burma. Nyunt Than adds, “Sometimes they go out and kidnap the child and sell them to the army. The army is notorious because soldiers constantly flee [their posts]. They need manpower and impressionable young people will shoot whatever they are asked to shoot.”

Regarding issues of trafficking and exploitation of migrants, Nyunt Than recalls a story of a 20 year old girl from the ethnic Mon minority that he met in 2007. She was a refugee who crossed over the border to Thailand looking for work. After finding a job at a fishery, she was captured one night and raped by seven Thai men. She was then taken to a house where “girls are kept naked so they will not run away.” When she was transferred to another house, however, an old lady gave her clothes and she jumped out the window and eventually escaped. He recalled her telling him, “’I never thought something like this would happen to me.’ This is just one story; there are many abuse stories about immigrants who try to cross over the border,” he said.

When asked about the future of Burma, Nyunt Than responded that some elements of the regime are realizing they are hurting the country and that they are hurting the population. The regime leaders want the country to be perceived as a “modern Burma” but their policies and oppressive actions are not furthering the goals of a modern democratic nation. The regime is slowly realizing that they must engage with opposition forces like Aung Sang Su Kyi’s party.

“Burma is a land of grieving mothers,” Nyunt Than said. “So many of us who got involved hurt our parents because students left to the border to flee and could not come back due to the regime. Many of us left our parents behind. Even many of our parents died behind. Even I had to fly to Bangkok in 2007 to meet my mother for the last time and a few years later she died. I was fortunate even to have the chance to meet her."

When addressing the current situation in the country, Nyunt Than lamented that “the young generation has no education and no skills to help themselves or help their country, which is a real loss. How do you recover from lost generations?” He mentioned that one reason why he is working hard as an activist for a democratic Burma is due to his memories of having freedom as a college student, and that many of the people who are now young have no such thing as university lives. “Their university lives are gone, it doesn’t exist and that’s what makes me feel so bad about this new generation.”

Nyunt Than’s own children were born and raised in this country, but he makes sure to instill some Burmese cultural values and traditions within his family. All three of his children join him in Burmese protests and events. “They are activists. I bring them wherever I can. They grow up seeing things that I do.” He also makes sure that his children learn Burmese, and they are known for their poetry recitations at local activist events.

Currently the struggle continues for the nation of Burma. Many activists live in exile or are currently imprisoned. It is estimate that there are currently 2,200 Burmese political prisoners in the country. Recently the Burmese government released 120 of them. Maybe this is the modern engagement that Nyunt Than mentioned, but it is far from enough. The country is impoverished with low life spans, low education, and issues regarding child soldiers and human trafficking. Yet activists like Nyunt Than fight on, just as they have since 1988. It has been over 20 years, but Nyunt Than still looks to the horizon towards change.

Though the situation is challenging, he and many other activists like him, hold dear a strong hope for a democratic future for Burma.