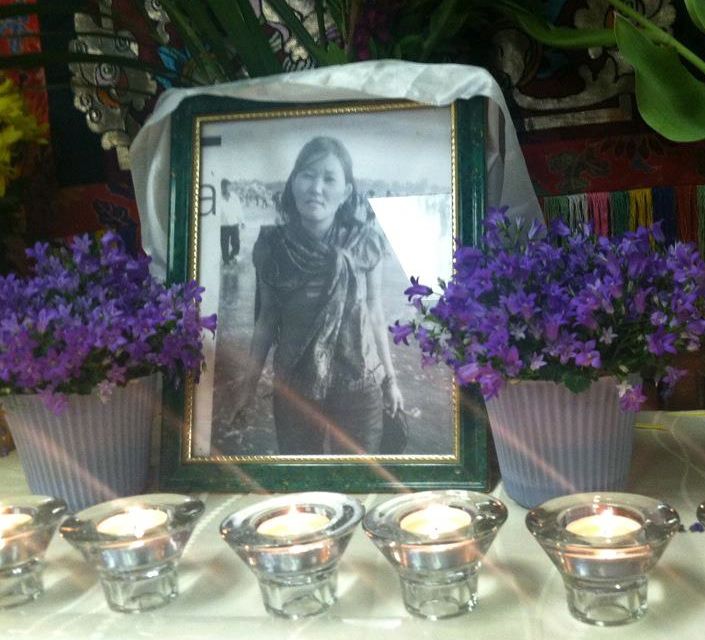 On Monday, April 2nd, seven innocent lives were abruptly ended in a horrific shooting at Oikos University in Oakland, CA. Monday’s tragic incident was particularly shocking and unprecedented for the Tibetan and Sikkimese communities here and everywhere as we mourn the untimely deaths of Sonam Chodon (Tibetan) and Tshering Rinzing Bhutia (Sikkimese). Sadly, these were also the two victims whose nationalities were dissolved into "Nepal" and/or "India" in earlier media reports, reflecting how without a sovereign statehood we are vulnerable to ethnic invisibility even in death.

The other students who were killed were of Nigerian (Doris Chibuko), Filipino (Kathleen Ping), Guyanan (Judith Seymour) and Korean (Lydia Sim and Grace Kim) ethnicity. The shooter, One Goh, was Korean and is in police custody. My heart and prayers go out to all the families and friends of those impacted by this horrific act and to their communities. Many of us have heard and seen reports of random shootings in the US or elsewhere. Be it two senior high school students’ mass shooting in Columbine, Colorado; a 17-year old boy’s consecutive shooting sprees at his secondary school and a car dealership in Southern Germany; a deranged shopper’s random shooting in a Dutch mall; a disturbed American GI’s shooting rampage in an Afghan village; or a 43-year old Korean immigrant’s madness at Oikos University Oakland this week – horrific shootings resulting in multiple innocent deaths are always a shock to our system and psyche. No matter what the circumstances, these acts are inconceivable each time they happen. It reminds us of how we, humans, can crack somewhere so deep inside that it can lead to incredible suffering for oneself and other innocent beings.

That said, Monday’s incident represents a tragedy for many of us, particularly those of us living in the United States and its immigrant communities.

Tragic because it is the worst case of senseless shooting in the Bay Area involving mostly Asians. Tragic because it exemplifies how a system failed to support a new immigrant to this country troubled by his own loss of a mother and a brother last year under different circumstances. Tragic because it is yet another example of how this country’s laws around gun control do more harm than good for society. Contrary to the proponents of laws against tighter gun-control laws, America’s "right to bare arms" ended seven promising lives and set in motion a likely lifetime of incarceration for one on Monday. Tragic because it shattered dreams, broke hearts and forever separated families from their loved ones.

We are all impacted by a deeply sad and tragic set of circumstances that led to the loss of these 7 precious human beings, including our very sister, Sonam Chodon, and our cultural brother, Tshering Bhutia from Sikkim. As I learned from surviving siblings and close friends, they were two lovely aspiring human beings with dreams to do good in this sometimes crazy world we live in. A soft-spoken nurturing Sonam Chodon was deeply committed to serving her community, which she did for five years on the staff of Department of Education within the Tibetan exile government in Dharamsala, India. She was on her way to completing her nursing courses at Oikas University and had been in the US for just under two years. She was poised to do more good in the world with her nursing degree at age 33.

Incidentally, both Sonam Chodon and Tshering Bhutia had no living parents so their surviving siblings are bearing yet another personal loss. Arrangements are being made to fly Tshering Bhutia’s body back to Sikkim for ceremonies in his homeland. He was a cheerful and hardworking man who would’ve turned 39 this month! He was on his way to apply for US citizenship this year.

On Tuesday April 3rd, the Tibetan Association of Northern California (TANC), a nonprofit that oversees the wellbeing of the local Tibetan community, hosted a beautiful prayer ceremony for all the victims and their families at the Tibetan community center, De-Shi Phuntsogling, in Richmond. Tibetans and Western friends chanted Buddhist prayers led by maroon-robed monks from the Gyuto Vajrayana Center in San Jose and Nechung Buddhist Center in El Cerrito.

I have never seen the Tibetan community center so full with people as that night, with an estimated 150 in the audience. The show of community support for the victims and their families was moving and quite a number of non-Tibetans were there as well. Six of my own colleagues from Oakland-based nonprofit, Community Health for Asian Americans (CHAA), were present also. CHAA’s Executive Director, Beatrice Lee, read a heartfelt condolence letter on behalf of her organization board and staff. TANC President Tenzin Tsedup gave an emotional memorial to his former classmate, Sonam Chodon, and acknowledged Tshering Bhutia, with full commitment from TANC’s side to do whatever is necessary to show support to his bereaved family in Sikkim as well as that of Sonam Chodon’s. At the end of the ceremony, people went up to Sonam Chodon’s brother to express condolences (Tshering Bhutia had no relatives or family in the Bay Area). It was a deeply emotional time for everyone regardless of how personally we knew Sonam Chodon or not during her life.

There was a momentary merging of Eastern and Western cultures in the openly public display of tears, sorrow and physical embraces of solidarity against a more stoic cultural backdrop. I watched how gracefully Sonam Chodon’s brother acknowledged quietly each person’s condolence and accepted the embraces despite the personal grief. He later shared with me that that night’s show of community’s solidarity was something he will cherish and felt deeply grateful for.

Four Tibetans were involved in this incident, three were women. Sonam Chodon’s classmate and friend narrowly escaped death by hiding under a table in the class, another Tibetan woman in a separate room actually saved herself and her colleagues from potential fatality by locking their class door and turning off the light just before the shooter got there. Tragically, Sonam Chodon was killed.

In many ways both the Tibetan and Sikkimese communities are blessed to have Buddhist spiritual principles to draw strength from and keep spirits hopeful. Customary to Buddhist tradition, community members at the dedication that night offered donations via TANC for the families of Sonam and Tshering as contributions toward butter lamp offerings and prayer ceremonies throughout the first 49 days following their demise. People poured hearts and purses in a generous show of support.

My heartfelt prayers to ALL the families, friends and communities impacted by this tragedy including that of the perpetrator. May those deceased rest in peace and may their surviving loved ones move through their painful loss with compassion and forgiveness.

We are all the same in that one day we all have to bid farewell to this life! When and how we get to do that is unpredictable and beyond our control. So treat each day like a gift from the universe to do good in this world!

FYI: This piece was shared and approved by Sonam Chodon’s brother and Tshering Bhutia’s best friend and nephew before going public. For tax-deductible donations toward memorial costs of the Tibetan and Sikkimese victims, please send checks to Tibetan Association of Northern California (TANC) with "memorial" in the memo and mail to TANC, 5200 Huntington Avenue, Suite 200, Richmond, CA 94804.