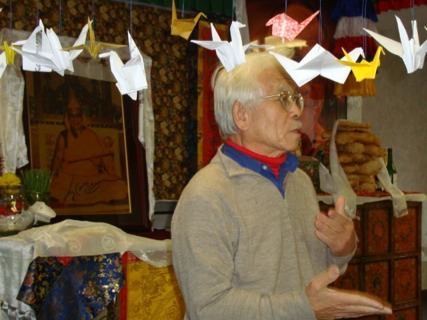 Just days after the devastating earthquake and tsunami that claimed more than 30,000 Japanese lives, CHAA and its partners raised over $3500 for relief efforts through the 1000 Peace Cranes event on March 19.

Hosted by CHAA, the Tibetan Association of Northern California (TANC), and Friends of TANC at the New Tibetan Community Center in Richmond, the fundraiser featured an opportunity for community members to donate to the Japan Relief Fund and fold paper cranes while listening to a message of hope and acceptance from keynote speaker and Hiroshima survivor Takashi Tanemori.

“We are thankful to be able to cosponsor this event,” Lee said. “It’s not a happy occasion why we’re here today — to mourn — but we can take what has happened, even if painful, and turn it into a positive action. Today is to show our solidarity.”

Tanemori then relayed his experience of surviving and moving on from feelings of anger and revenge after the historic blast that claimed six members of his immediate family when he was only eight years old.

“I’m no longer living in fear because no one knows what will happen tomorrow,” Tanemori said. “The past — good or bad — is gone. So what do you have left? The moment. You and I have this very moment, right now.”

Tanemori continued to share lessons for living taught to him by his father shortly before his death. Those lessons, born from the Samurai code, eventually led Tanemori to a place of acceptance and an opportunity to give an inspiring message in the wake of perceived hopelessness.

“Know yourself,” Tanemori said. “Honor your heart and what’s true, no matter what the consequences. Finally, learn to live for the benefit of others.”

Before, during, and after Tanemori’s remarks, the 200 community members in attendance folded more than 300 paper cranes that are now split among the newly acquired Tibetan community center, CHAA offices, and a Hiroshima memorial museum that collects cranes from around the globe, according to Eva Herzer, Co-Chair of Friends of TANC.

“We asked members of the Japanese community what we could do after such a tragedy, and the feedback we received was that peace cranes would fit into the event nicely, as they serve as a traditional cultural symbol of hope and comfort,” Herzer said. “It was encouraging to see such a diversity of people folding cranes, from little children to elders in their 80s and across racial and ethnic groups, including Tibetans associated with Japanese, Caucasians, and African Americans.”

“It was touching to see many different types of people there, particularly the Tibetans, whose presence I felt was so peaceful,” Tsuchiya said. “They were generous in sharing their hearts even when they too are suffering and worrying that their country is always in danger of being conquered. Everyone’s presence was warm and encouraging, and the sense of community support brought much comfort.”

If you would like to donate to the Japan Relief Fund, please visit www.jcccnc.org for ways to contribute. To view more pictures of the event, click here.