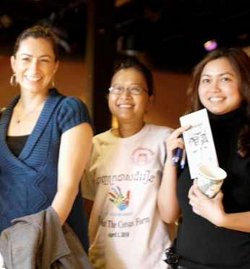 In order to ensure the highest possible rate of U.S. Census participation, CHAA is engaging and informing youth and Asian Pacific Islander communities about the importance of the nationwide project.

Occurring only once every decade, the census is an official count of the population that provides politicians and lawmakers with valuable economic, demographic and social information.

“Our country doesn’t function well without an updated census to distribute funds to areas that most need them, support community decisions about their own futures,”
stated Bob Groves, Director of the U.S. Census Bureau. “It’s easy, it’s safe, and it’s important.”

Consisting of 10 questions and taking less than 10 minutes to complete, the Census aims to count all U.S. residents, citizens and non-citizens alike. The census does not ask about the legal status of respondents or their Social Security numbers.

Census forms are available in six languages, including English, Spanish, Chinese (simplified), Korean, Russian and Vietnamese. In addition, Language Assistance Guides are available in 59 different languages to help participants fill out the English version of the census form.

After completing the questions, residents are required by law to return the form by mail. Citizens who don’t return the form may be visited by a census taker, a member of the community who will record their answers to the questions on the form. The census taker is hired by the Census Bureau to make sure that each neighborhood gets represented as accurately as possible.

All answers are confidential, as all Census Bureau workers take an oath of nondisclosure to protect the confidentiality of the data.