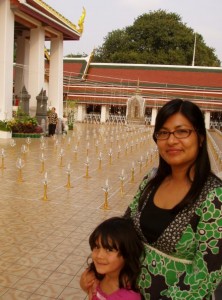 The following article is courtesy of Sapana Sakya, originally published on caamedia.org.

Identity has always been a vexing issue for me. I was born in Nepal, in the capital, Kathmandu, where identity is established first by ethnic group. There are more than 100 distinct ethnic groups and castes in the Kingdom of Nepal. I am Newari, the original inhabitants of the Kathmandu Valley, and a Sakya, one of the families or clans that represent the monks and nuns of the Buddhist community.

When I was 5 years old my family migrated to Thailand where I attended an American international school in Bangkok. I was the only Nepalese person in my school. To be anything other than Thai, Chinese or Indian – the majority of the student body, was to be looked down upon or considered an exotic “other” so I learned to keep my ethnicity to myself and didn’t correct people when they assumed I was Thai or Indian.

As I got older, I appreciated my “uniqueness” but I further honed my ability to mingle and pass in and out of ethnic groups and cliques, by learning their languages and mannerisms. When I migrated to the United States to go to college this knack for blending in became something of a superpower. But, like any superpower there are some drawbacks. What I lacked was any sense of community or belonging, I felt like an imposter, or worse, invisible.

My work at CAAM, where the goal is to represent the vast, complex diversity of the Asian American experience has been informed and reinforced by my own life journey. I believe in the value of individual experiences but also in the value of being part of a community. A community can offer support when an individual is in need and strength when it comes to having one’s voice heard.

Until now, I categorized myself as South Asian but I always felt that the term South Asian represented the dominant group of that subcontinent, India. I am South Asian and Nepalese; the Nepalese language is similar to Hindi but Newari, my ethnic language, is closer to Tibetan and Burmese. So Himalayan is a more accurate descriptor of my culture and ethnicity.

Having the term Himalayan American to describe myself strengthens my identity and allows me to explore what makes us a community and how we can strengthen that network. But I am also still South Asian and Asian American because there I enjoy being associated to these larger communities for both political and social reasons. Identity politics in the US is a whole other can of worms which we’ll leave for another blog post! The question of identity is always going to be complex.

But the Himalayas also conjure up images of tranquil, idyllic Buddhist hamlets of Shangri-la. This is just as much a stereotype as a Bombay sex worker or a security guard, which is what many an Indian acquaintance has brought up minutes after being introduced.

Those two stereotypical images are the reasons why I work in media and believe in the importance of telling your own story. Our own stories, be they Himalayan or otherwise are always much more interesting and nuanced than anything someone else creates about us.

What does it mean to be Himalayan American? Do we need this term to better describe ourselves? Why not Asian American or South Asian American? The answer lies in the mountain range that connects Bhutan, Nepal and Tibet, the Himalayas.

The Himalayan American community is a new ethnic group so no population numbers exist. When confronted with the choices on census forms many check “other”. But one number is concrete, the 50,000 Nepalese-Bhutanese refugees that the United States government will be relocating in the coming years. Oakland, California and Houston, Texas will receive the majority of these ethnically Nepalese families who were expelled from Bhutan. Tibetans and Nepalese have been settling in the San Francisco Bay Area for generations and the numbers have increased recently due to social unrest in Nepal. The city of Berkeley is one of the few cities that recognize Tibet as an autonomous region.

Grassroots organizations like Sahayeta and Community Health for Asian Americans have been working to provide much needed health services, education and job training to assist the Himalayan American community in the Bay Area. This month, CAAM and these two organizations along with the Nepalese professional association CAN-USA, will host the first Himalayan Youth Leadership Summit in Oakland.

The Himalayan community, especially the youth are ready to take the next step towards defining their identity here in the US. The goals of the Summit are to empower youth to see their own futures in a positive light, to provide a platform for the youth and the community to share their ideas and talents and finally, to create an alliance that encourages youth leadership and growth.

If you are a Himalayan youth or are interested in these issues please check out the Himalayan Youth Leadership Summit.

Sapana Sakya is Public Media Director at the Center for Asian American Media and the producer and editor of the award-winning DAUGHTERS OF EVEREST.