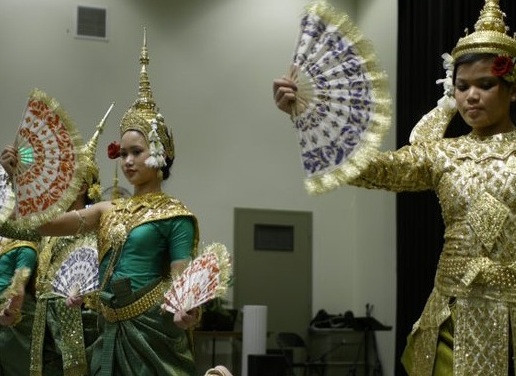 Funded by the National Institute of Health’s National Center on Minority Health and Health Disparities, the Cambodian Women’s Health Project — now in its second year — involves a multi-generational group of Cambodian women (the CWG) sharing and using their personal experiences to promote healthy behaviors in their community.

Cambodian New Year — or "Chaul Chnam Thmey" in Khmer — lasts for three days beginning on New Year’s Day (usually falling on April 13th or 14th) and corresponding to the transition between the end of the harvesting season and the beginning of the rainy season in Southeast Asia. Cambodians living abroad often choose to celebrate during a weekend near the actual holiday. Working cooperatively with the other Cambodian organizations, the CWG chose April 2 for their celebration, not wanting to interfere with celebrations in neighboring communities.

While many holiday celebrations may encourage or enable unhealthy behaviors, the event sought to serve a larger purpose in promoting community wellness while also encouraging guests to have a good time.
The idea for the day arose from issues identified within the Cambodian community by the Cambodian Women’s Health working group as an intervention to deal with some of those areas, according to Shadia Godoy, CHAA Program Supervisor.

“The Cambodian New Year event was aimed at targeting specific issues, including isolation, harmful alcohol use, drug use, and gambling,” Godoy said. “The intention was to put on a social event that was culturally authentic yet free of alcohol, drugs, and gambling.”

Despite the typical stress and preparations associated with executing a large-scale event, members of the group left the day feeling happy, proud, and supported by their community.

“I am very proud that people of different generations came to the event and that they all thought the food was good,“ Choun said. “People really liked the traditional dance performance, and some asked if we will have this event again next year. I was also proud and encouraged that people wanted to learn about the Cambodian Women’s Group at the event.”

Fellow member Phanara reflected on not only the support shown to her by the community but by her family as well.

“I was so happy to see so many people come,” Phanara said. “People congratulated me as to how well-organized the event was. And my husband and son were there to help from the beginning to the end of the event.”

“Not only were many Cambodian cultural traditions brought to life at this event, but Cambodians from across the Bay Area came together, many of whom had not seen each other in years,” Rojas-Cheatham said. “People had a great time building community and celebrating Cambodian New Year with old and new traditions in an alcohol and gambling free environment.”

In addition to organizing the day’s schedule, the Cambodian Women’s Group also prepared a statement thanking those in attendance for their support and encouraging them to unite, both for peer support as well as preservation of Cambodian culture.

“We hope that you will all love each other and commit to support Cambodian people into the future,” the statement read. “Young people, adults, and seniors must stand up and unite to become stronger. When we, the older generation, are no longer with you and part from this world, please continue to emphasize unity and our people will benefit from embracing the Cambodian culture. And remember, you as Cambodians must pass down the traditions into the future.”

And members of the Cambodian Women’s Group were not the only ones who viewed the day as a success.

“Aside from the amazing cultural performances, one of my favorite parts was watching the game between the youth — the “tha-daum sluk chur.” It was gratifying to see the youth so engaged in the event,“ Godoy said.

Sotheavy Tan, a member of the Cambodian Women’s Group, was elated to have the community unite in what has been a trying time of conflict.

“People were very glad to see each other; they haven’t seen a New Year celebration like that in a very long time due to the temple spit,” Tan said. “This event was healing following the conflict with the temple. I saw the community come together, instead of cracking like in the past. Our New Year should bring peace and happiness, and it did.”

Angelo Ercia, CHAA Community Health Program Specialist, witnessed the success and power of all the day’s elements and attractions.

“I greatly enjoyed the whole day,” Ercia said. “Once I heard the music and saw the people, I knew it would be good. The event did what it was supposed to do.”

For more photos from the event, please see the CHAA Facebook album.