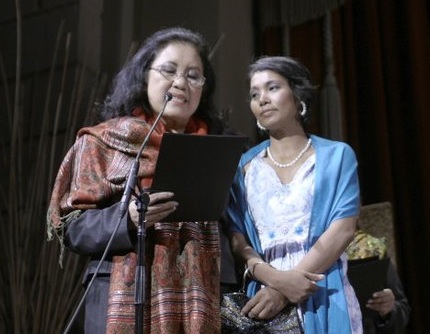 The honorees — who either experienced violence personally or witnessed it within their communities — have dedicated themselves to ending violence against women through sustained grassroots organizing. Along with four other award winners, Oo was honored for her work and commitment to positive change and social justice.

“I am honored to be recognized with other advocates who have overcome their own struggles and helped women get needed services in the community,” Oo said. “And while it’s nice to celebrate what we have accomplished up to this point, there is still much work left to be done.”

After suffering domestic violence at the hands of her husband, Oo has received counseling, filed for divorce, and now has sole custody of her three young sons. She has experienced first-hand living in a shelter to protect herself and her family, and now counsels other refugee women who are also suffering from abuse on how to find help and resources when they are ready. An advocate on behalf of families suffering from PTSD due to life experiences as refugees, Oo has also found herself helping Burmese refugees cope with the stress of resettlement in the U.S., many after years of living in camps on the Thai-Burma border and in Malaysia.

V-Day, according to Oo, is bittersweet in that it recognizes domestic abuse as a significant problem but also demonstrates solidarity and an ongoing commitment to positive change by community members and activists.

“Many women in society are isolated, suffer from domestic violence, and are forgotten,” Oo said. “V-Day is important because it aims to empower women everywhere, reminding them that they are not alone.”

Drawing from her own experiences, Oo is particularly passionate about women and the effects of abuse on their roles as wives and mothers, but also on children, culture, and society at large.

“Every 15 seconds, a women suffers physical, emotional, or verbal abuse,” Oo said. “And psychological abuse is often more damaging than physical abuse. Physical marks can go away, but emotional scars stay forever. And when you don’t get support, everything falls apart and you start feeling hopeless about the future.”

Because of some cultures’ inclinations to ignore or minimize women and their issues and perspectives, Oo says, it is more important than ever to take action and give support, because the woman who needs it might not have anyone else.

‘In many cultures, there is no respect for women and children — just for men, the elderly, and faith leadership,” Oo said. “Many cultures won’t let women open their mouths, and those women don’t know where to go for support because they don’t speak English. And to make it worse, society ignores the problem, because it’s the woman’s problem.”

Oo emphasizes that anyone can take positive action to help end abuse against women, whether they support someone they know personally, volunteer for advocacy organizations, or simply adhere to high standards of behavior and respect in their everyday lives.

“We need to ask ourselves what we as a community are going to do to promote change and end the cycle; we have a responsibility to take action,” Oo said. “ By not allowing our sons to be abusive or disrespectful to girls or women, we are taking action. By speaking up, we are taking action. Counseling can be over-emphasized and often doesn’t take into account culture. But if we hear, listen, care, and provide love and support, we can really help. As human beings — male or female — we need to support each other.”

If you would like to be involved with the movement to support women or are in search of help yourself, please contact Nwe Oo at nwe.oo@chaaweb.org.