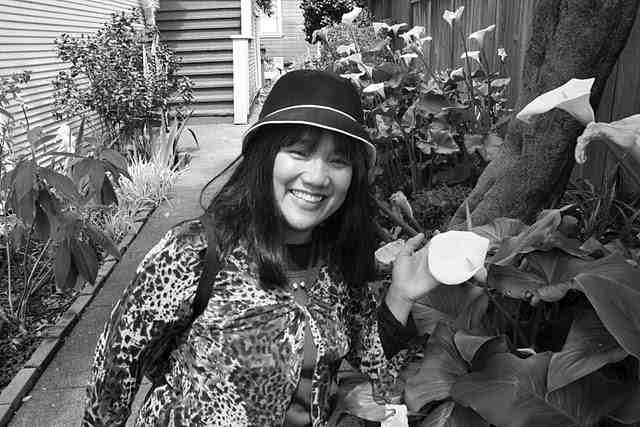 The following article is courtesy of Nadia Hussein, originally published on her blog Us Ordinary People.

I was introduced to Pam while working on a video documenting project with CHAA (Community Health for Asian Americans). I was immediately drawn to Pam’s vibrant and warm personality. CHAA chose Pam to give the organization insight into the Thai community in the Bay Area. While filming, I learned about Pam’s personal journey from Thailand to America.

Pam’s name in Thailand was Punchakarn. She is from the Khao Wong District, Kalasin Province in northeastern Thailand. Both of her parents were teachers, and Pam herself was a public school teacher in Thailand for 17 years before leaving that job to teach for two years at the school her family established and ran. Pam was very passionate when she spoke of her school, which is a private school for students but also provides free education for those coming from poor families. She told me how her school also provides support for students who have been rejected by other institutions. She recalled one student who had been performing poorly at his former school and had behavioral problems. When his parents moved him to Pam’s school, he improved and received good grades. He is now is ranked first in the school. “He got all grade A in every subject and his reading is compared to a 6 grader right now. So I was very proud of our school,” Pam said with a smile on her face.

Unfortunately, her school fell into debt due to economic difficulties in Thailand. The government cut its budget, so the school soon faced money troubles. Because of this, Pam decided to come to the US to earn more income for the school. To her, the United States provided the opportunity to make enough money to pay off the debts sooner, and she felt that she could use her English skills to accomplish this.

When Pam first came to America, she was undocumented and came to Los Angeles, where she worked at a Thai restaurant. Pam recalls, “Working in Thai restaurant is very hard because we have to work 12-14 hours non-stop with no break. We started working from 10:30 in the morning till 11:30pm. I almost died the first week because I feel so felt exhausted. I go back to the place I sleep and I just sleep, many days I didn’t want to eat at all. I was very bad both physically, mentally; I almost gave up many times. I just encouraged myself that no, I cannot give up because I have some big goal to go through. That’s why I try to keep moving, but it’s very very tough.”

During her time in L.A., Pam faced what she considered to be the most difficult time in her life. She was let go from the Thai restaurant due to slow business. She had no money for rent or food. Pam recalls that she “got to the point where I only have 50 cents left in my pocket. 50 cents! Maybe it was time I needed to go back home. I don’t see the future here so I try to think how could I survive. I decided to borrow five dollars from my housemate and bought a day pass." She explained, “In L.A. with a day pass, you can get unlimited ride in any buses and subway all day long until midnight. I got on the bus to drive to at least a one day job so I can have some money to survive, and fortunately I found one restaurant that they said, ‘today our head chef was sick so I need you.’ That day I worked as an assistant chef with the owner, and got paid 70 dollars. I used some of it to buy food and then saved some of it for the bus fee so I can have opportunity to find more job.” Pam recalled another time when she was very sick for four days. This was during the time of the Songkram Thai festival in L.A. Despite her illness, Pam forced herself to attend the festival, where she fatefully met her future employer, who paid for her plane ticket from L.A. to Oakland to have her work as a translator on a publishing project.

Working in the Bay Area was a great experience for Pam. Working for her new boss “was very convenient and very relief because I don’t have to pay for the rent. I have 3 meals for 7 days even though on weekend I don’t need to work, but I have food to eat. And then many weekend they took us, me and my friend, another girl who works on the same project, to visit in the Bay, like Napa Valley, San Francisco, take pictures of the golden gate bridge. So my life sort of flipped, like you flip your hand, I was really happy because I can have money to send back home and I have a better life.”

Pam currently provides freelance Thai translation and language lessons. She currently volunteers to help other Thai immigrants in the Bay Area and has been volunteering at a local elementary school as a teacher’s assistant. She has also gotten married, and is now a green card holder, putting to rest many of her old anxieties related to jobs and immigration.

Though her life is in a better place now, Pam has not forgotten the challenges she faced. She recalls when she and another undocumented friend wouldn’t dare cross the street when there was a red light due to the fear of being caught by the police and deported. “We lived with fear all the time no matter what. Lived with fear, period. We saw no future, but we see small hope that we can live a better life. Me and my friend, and many people who cannot tell about their story. We kind of understand each other about how hard it is to live illegally”.

Pam added, “Thai people came here for financial issues. We don’t have war in Thailand: we came here to try to find some job. So they have to live very hard life because they have no choice to complain. The Thai people have specific problem because they are undocumented persons. The Burmese, Khmer, the Karen Bhutanese or the other Asian countries, they are in a better status because they have a green card; at least they have a social security number. They can work but they have a lot of problem about languages. But us, we have a double problem because we cannot work here legally, and many of us can’t speak English”.

After all of the struggles she has faced, Pam feels a personal need to use her skills to help others in her community. “I want to help the Thai people and explain that they should not be scared, you can have some organization that can help you. If Thai people know more about organizations they can ask for more help, because right now they are scared. They don’t want to show themselves and present themselves in public.

“I volunteer as a Thai interpreter and I feel much better. I feel proud of myself. I want to help and expand information about organizations; I really want them to know that there are many organizations that can help them even though they are undocumented people. "

Though she may not be an elementary school teacher anymore, Pam is teaching many people around her by reaching out to people within her community about resources that may help them in their own struggles. From struggling to pay rent as an undocumented person to starting her own translation business, I hope that people can look at Pam’s journey and be inspired by her hard work, dedication and belief in making a better life for herself, a sentiment shared by many who come to this country.

To visit Pam’s website and have access to her Thai translation and language classes, go to www.weekendthaitranslation.com.