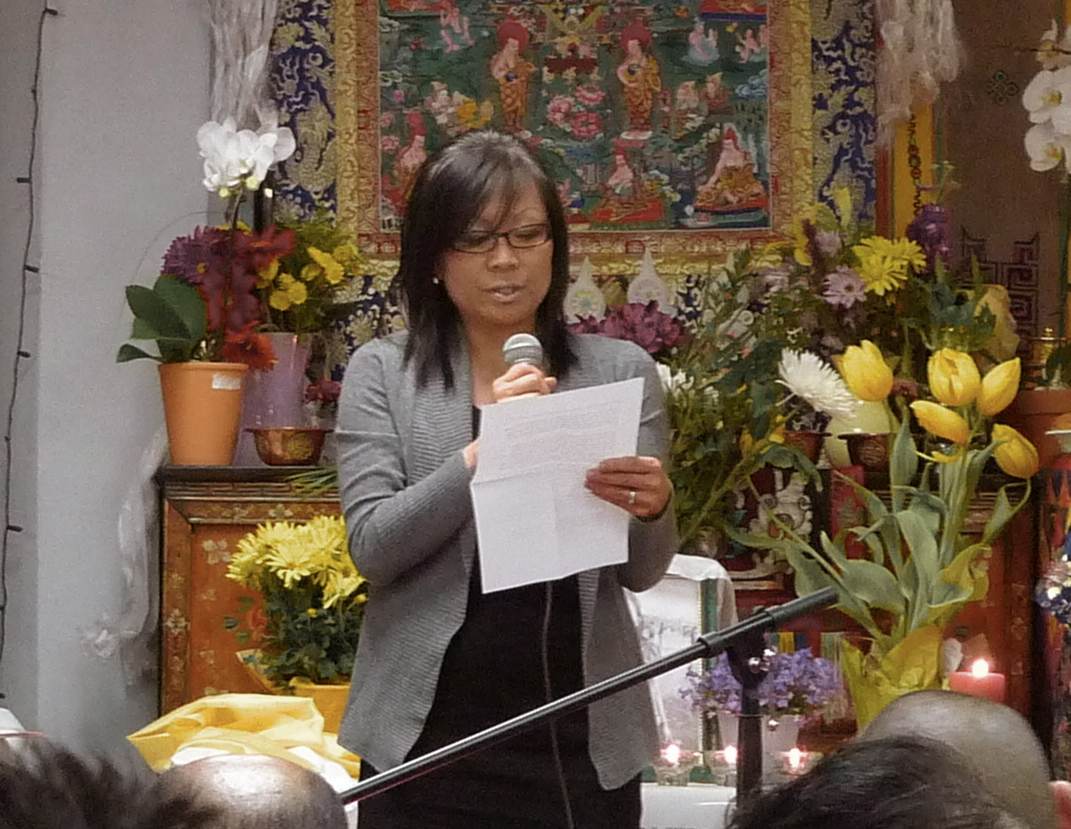 A letter read by CHAA’s Executive Director, Beatrice Lee, at a memorial tsok ceremony at the Tibetan Association of Northern California’s community center in Richmond, CA, on April 3, 2012. Two of the victims were immigrants from the Himalayan region (Tibet and Sikkim), and most were Asian (Tibetan, Sikkimese, Filipino and Korean). A Nigerian and Guyanan student were also killed. For tax-deductible donations toward memorial costs of the Tibetan and Sikkimese victims, please send checks to Tibetan Association of Northern California (TANC) with "memorial" in the memo and mail to TANC, 5200 Huntington Avenue, Suite 200, Richmond, CA 94804.

Dear Families and Friends of the Victims of the Oakland Shooting on April 2, 2012.

On behalf of the board, staff and partners of the Community Health for Asian Americans, a nonprofit organization that offers services for the health and wellbeing of Asian and Pacific Islander communities, I send our heartfelt condolences to the surviving families, friends and community members of all the seven people whose lives were tragically ended by a random shooting at Oikos University on April 2, 2012, as well as those who survived but were injured.

There are seldom words comforting enough to console those who experience the shock and grief of losing loved ones in the most unexpected of circumstances. We recognize that members of many Bay Area communities including the Tibetan, Sikkimese, Filipino, Korean, and Nigerian communities, will grapple in their own ways with the shock, sadness and the senselessness of this tragic incident. While some were here longer in the US than others, all the people who lost their lives were immigrants like you and me, with dreams and aspirations for a better life in the United States and specifically in our beautiful Bay Area. We have heard and read of enraged shootings in schools and university campuses across the United States over the years, but yesterday’s shooting has hit closer to home.

As an API organization based in Oakland, CHAA is deeply saddened. Our hearts go out to all the communities that are experiencing directly unspeakable pain while facing the challenges of living in a country and culture that is so different from where they came. Many dreams were shattered, many hearts were broken, and many families are forever separated from their loved ones. Those who were injured during or present to witness the terrifying events of that day are deeply traumatized, and will likely relive the fear and anguish they experienced for years to come. We also extend our hearts to the man who did the shooting, and his family and friends, recognizing the trauma they are experiencing as the result of his actions. It is almost impossible at times of such tragic news to make any sense of such violent acts that serve no purpose but to inflict pain and suffering on innocent people.

At CHAA, we have staff members from several of the communities impacted by yesterday’s event including the Tibetan and Filipino communities. We offer you their time in service to assist in any way with your cultural rituals around death, grieving and recovery at this time of need. Please also know that we are here for you in any ways you and your communities need us.