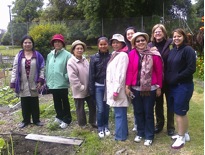 By Matt O’Brien
The Oakland Tribune

Refugees who once harvested food in the foothills of the Himalayas and the lush fields of Southeast Asia are nourishing a garden culture in the flatlands of East Oakland.

Their first crop is emerging this fall from a fenced-in plot off 11th Avenue, crammed between a basketball court and a grove of old palm trees.

Green mustard seeds peeked out from the grounds last week. Bhutanese refugees hope to pluck the leafy greens in a few weeks, sun dry them and transform them through weeks of fermentation into a dish called "gundruk."

"The farm activity makes them stand on their own feet," said Tila Dhakal, a 27-year-old refugee from Bhutan. "They don’t want to buy any vegetables from the markets. If they grow by themselves, they won’t use any pesticides. It will be more nutritious, more tasty."

Gundruk is also a rare treat in Oakland, he said. It’s a food he would be unable to buy without paying a premium. Burmese refugees are tilling the same 11th Avenue grounds alongside the Bhutanese and have a similar dish in mind, but they ferment the greens differently, using cooked rice and salt. Cambodian women have cultivated rows of pansies a few feet away.

The team hopes later to terrace a slope that leads down to a parking lot, and to build a bench where gardeners can rest in the shade of a California pepper tree. Few of the gardeners are clamoring for fancy implements. They don’t need them. Nor do they need footpaths, which get in the way of the vegetables. But the garden is so successful, said 65-year-old Bhawani Dhimal, that the gardeners are running out of room.

"These spaces are so small for us," he said. "At some time, we are hoping we get some more space."
Dhimal knows something about farming. He worked for Bhutan’s Ministry of Agriculture before he was forced out of his homeland in an ethnic conflict 18 years ago. When he arrived in Oakland last year, he quickly realized he would have trouble working the land. He planted marigolds in some pots, but could not work outside. The landlord of his multifamily apartment building would not permit a backyard garden, fearing excessive water costs.

That was before Dhimal met volunteer Zack Reidman.

The test garden off 11th Avenue, a collaboration among three refugee groups, is Reidman’s brainchild. He worked on community gardening projects in Oakland and Maine, but noticed the Bay Area’s popular urban gardening movements were not tapping into the agrarian heritage of hundreds of refugees who live in neighborhoods east of Lake Merritt.

"They come from a rich tradition and vocation for farming," Reidman said. "Gardening at this scale is kind of a no-brainer, except for some of the local climatic conditions."

Such initiatives have worked elsewhere. First lady Michelle Obama visited a 2.3-acre farm in San Diego this spring that is considered a model for refugee garden projects. When Dhakal visited his Bhutanese relatives in Idaho this year, he saw a garden project there.

In Oakland, where refugees have settled in many neighborhoods, organizers hope to make the tiny community garden on 11th Avenue part of a bigger movement, expanding small farm projects to yards and vacant plots.

Their goal, says Reidman: "Find as many spaces in as many creative ways as possible. Make sure those spaces are sustainable and can be used for at least a few years, if not indefinitely."

The community plot in the San Antonio district was offered to the refugee groups at no cost by Harbor House Ministries, a nonprofit organization that works with low-income families and had some land to spare. It is not the first community garden in East Oakland cared for by refugees — a garden at the Peralta Hacienda, the historic estate in the Fruitvale district, serves the Laotian Mien community. But the pent-up demand for gardening space is so great that refugees feel there could be many more.

The gardens grew in number this summer, mostly in secluded backyard plots. One Burmese family’s plot abuts an Interstate 580 sound wall. Another is near a school off of 35th Avenue. Reidman serves as a liaison between refugees and their landlords, trying to convince the landlords that offering garden space to their tenants is a good idea.

The idea won backing from a local nonprofit group, Community Health for Asian-Americans, which is trying to help Reidman scour the region for space to grow and money to secure land and equipment. The health advocates say the gardening brings a continuity to lives thrust from the countryside to a big city.

"We thought a garden would be a space where people could socialize, do things together away from home," said Sotheavy Tan of Community Health’s Cambodian Women’s Health Project, which is sharing the 11th Avenue land with the Burmese and Bhutanese groups.

Tila Dhakal’s father, Hem Dhakal, was jailed for 13 months in Bhutan before he signed a form promising he would voluntarily leave the country. The family was among tens of thousands of members of a Nepali-speaking minority pushed out of the Himalayan kingdom in the early 1990s.

When the Dhakals fled, they took a few belongings but left behind acres of cardamom, orange trees, vegetable fields and honey-producing beehives. They lived for 17 years in a refugee camp in Nepal, where they grew whatever food they could around their tiny hut, before migrating to Oakland last year.

Tila Dhakal found work at a store and is usually too busy to garden, but his aging father finds solace in the work, a way to lessen the frustrations of living in a new country where he speaks little English and must rely on his children for everything.

"He feels happy to walk there (to the garden)," said his son. "He doesn’t want to sit idly."

How to help
Anyone with open space, donations or ideas to help refugee gardeners can contact Zack Reidman, the refugee garden coordinator, at 818-738-8948 or zackreidman@gmail.com. The project to provide garden space to East Bay refugees is a collaboration between Community Health for Asian Americans, the Bhutanese American Community Center and the Burmese Refugee Family Network.

Reprinted with permission from the Oakland Tribune.