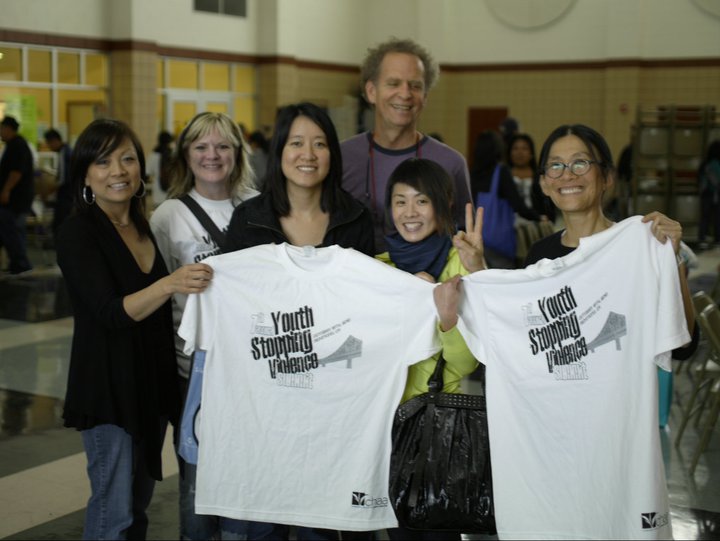 Celebrating its seventh year as hosts, Southeast Asian Young Leaders (SEAYL) attracted more than 300 attendees to the West County Youth Stopping Violence event on October 16th. Held at Lovonya DeJean Middle School, the day featured motivational speakers, performers, and workshops promoting the creation of a safer and healthier community while spreading a message of peace and unity to youth.

The event is designed to encourage youth leadership in addressing issues that lead to violence, according to CHAA Program Coordinator John Abella. Engaging youth and getting them involved in learning and leading through workshops and other dialogue ensures that their voice is heard and fosters a shared purpose in preventing community violence, he said.

“Our goals are to prevent violence by bringing our communities together through education and exploration of the issues that affect our streets,” Abella said. “We want to create unity of the diverse populations of the Bay Area, especially West Contra Costa County, because violence is an issue that affects everyone.”

While each annual summit is characterized by spirited discussions and performances, this year’s event possessed a strong introduced social media as a tool for promoting positive youth leadership, dialogue and support for youth-led violence prevention efforts. In addition to promoting and marketing the event through Web 2.0 means like Facebook, RYSEportal.org, LifePortal.com, and email blasts, SEAYL members displayed original music videos and other works conveying their anti-violence stance via YouTube.

“The idea of incorporating social media into the summit became even more timely in light of several recent youth suicides related to cyber bullying,” said Sue Denny, CHAA Clinical and Prevention Supervisor. “The youth are experts in familiar with using social media forums and we wanted to help them and their adult allies find ways to use these same forums used for bullying in ways that prevent violence.”

In addition to promoting current technology in spreading the anti-violence message, the day also featured more traditional outlets of expression.

“We try to make the event a platform where youth can speak their voice, and share their talents,” Abella said. “We look for youth to perform, because there is so much creative energy with younger people. We also aim to incorporate artistic and creative components to the event, such as a peace quilt where people wrote messages to those who they’ve lost or simply general messages of peace.”

Another memorable part of the day featured a speech by Gwai Boonekut, the father of Chan Boonekut, the teenage girl whose murder in 2003 led to the creation of both SEAYL and the summit. Gwai movingly reminded attendees about the murder and how it has impacted his family.

“It’s hard to believe that it was seven years ago, it seems like yesterday to me,” Boonekut said as he encouraged young people at the event to continue working to prevent violence in their communities. “You are all my sons and my daughters.”

Denny was struck by Boonekut’s address.

“Gwai’s speech was a reminder to me why SEAYL was created and the importance of violence prevention groups and events,” Denny said. “It seemed like his address was both helpful for him in dealing with his loss as well as meaningful for the youth and adults in the audience. It was a reminder that death is a permanent loss for the families and communities.”

While encouraged by the enthusiasm and dedication shown by attendees at the event, CHAA recognize that there remains much to be done to make Richmond a safer place.

“Events like this are intended to be inspiring, motivating and stimulating; however, real, sustainable change doesn’t occur because of one event,” said David Young, Program Director for CHAA Richmond Contra Costa County. “We need to institutionalize follow-up efforts, such as creating and promoting violence prevention curricula through our partners and stakeholders, utilizing the inspiration of the summit to engage volunteers in forwarding our work by supporting their violence prevention efforts, and creating systems and structures that enable both attendees and non-attendees to initiate violence prevention initiatives of their own.”

Abella agrees that progress needs to be a widespread community effort.

“We encourage other organizations to mobilize to bring their youth to these events, because it is sure to benefit everyone,” Abella said. “The more people we reach, the more of an impact we have on this community. I’ve worked with youth who say that the summit literally changed their lives. Knowing that is priceless.”